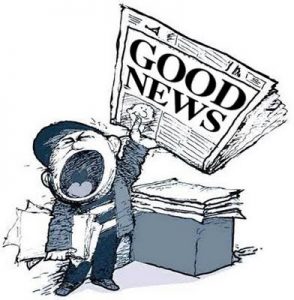 Where’s the good news? There doesn’t seem to be a lot lately. On the other hand, the media as a whole are happiest when there is a major tragedy to report. True, it’s their job to keep the public informed, but one gets a sense that the fouler the news, the more satisfied they are to have something they can really sink their teeth into. I suppose it’s human nature to be in the thick of things, and if the job is to relay the particulars then it must be all the more satisfying.

Here’s the beef: Even when there is no seriously bad news, the major media outlets seem to look for the darker side of life. If there’s a story about an inner city school program that is successfully sending 90 percent of their high school graduates to college, or a story about a towing service pulling a car out of a lake. The tow truck story most likely will get top billing.

There is good news and plenty of it. Here are just a few recent stories that perhaps didn’t get into your line of sight.

Kids Help Feed the Homeless
We often hear about the homeless problems when the weather gets warmer in the lower 48. It seems that folks who wander because they have no place to call home migrate north to escape the heat. Nonetheless, every city has more than its share of homelessness, and even the southern town of New Orleans has many in need.

Nine-year-old Tylon Martin and his brother, ten-year-old Darrel Martin took it upon them themselves to put together lunches for those living on the streets. They walk past so many people daily and wondered how they made a meal. Their mother Christy explained that they weren’t able to eat regularly because they didn’t have money to buy or make food for themselves. The boys got to work, and soon friends started helping out. Every day they make up bag lunches and hand them out as they walk around the neighborhoods not far from their own home. The boys take it a step further and write a message of hope, love and faith on the outside of each bag.

Benny Bucks
We hear the stories of bank robbers and petty thieves, high speed car chases, but have you ever heard someone tell the story of Benny Bucks? As it turns out an anonymous philanthropist has been making his/her way around Salem, Oregon leaving $100 bills in random locations. No one knows who the person is and there is no pattern to the places the “Bennies” are left. From cereal boxes to candy bar wrappers to clothes pockets in retail shops an unsuspecting recipient may find Benjamin Franklin looking up at them.

High-tech Roadways
It’s becoming a reality – roadways that never ice up, are shatter resistant – so no potholes, and return power to the community. That’s just the short list of their advantages. Solar Roadways, a company started by a couple out of Idaho was first introduced a few years ago. Now Missouri will be paving a stretch of Route 66 with the panels, and hopes to have it operable before the snow flies. Lives will be saved, both human and animal alike as the roadways warn with LED lighting if an animal is crossing the road ahead of an upcoming vehicle. Kansas City, Missouri may be the first to employ this technology, but if it saves money and lives they will not be the last.

This is just a little good news. The world is full of the stuff; we simply have to go looking for it. Even if it doesn’t get a hard news reporter’s blood running, it is great news that there are reporters who specialize in good news – go looking for it. Because, we were not born yesterday, and we know we have choices. I encourage you to look for the news that is uplifting and shines a different light altogether on the face of the world. Enjoy.